California’s been on my list for a while, so when a San Diego conference opportunity presented, I jumped on it. After attending numerous conference sessions, I set out to explore the city. My first walk was along the harbourfront. 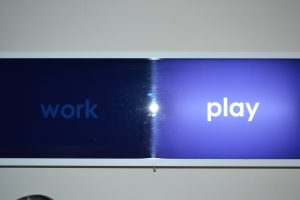 Setting out from my hotel, I wandered through the very commercial Seaport Village and kept walking. Although it’s possible to board the now-decommissioned USS Midway, I declined. Its size is truly awesome, dwarfing the numerous helicopters and planes on its decks. I walked all the way to the Maritime Museum, which allowed me to board and walk through classic tall ships, as well as a submarine. I’ve always wondered how I’d do in a sub, and now I know. Having done it once, I’m glad that I’ll never be asked to do it again.

After several more conference sessions, I headed out the next day to explore the Gaslamp Quarter. I’m always amazed at what passes for old on the west coast. Although charming, there are many much older buildings in Toronto or Peterborough, and here, the gas lamps are electrical. I made it as far as the Chuck Jones Gallery and spent a long time looking at original pieces by Chuck Jones, Dr. Seuss, Charles Shultz and others. It’s a delightful time capsule for connoisseurs of 1960s cartoons. 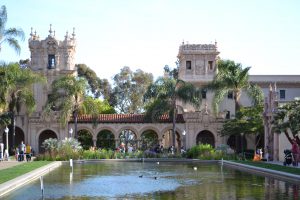 On my last full day, and after a few more conference sessions, I headed for Balboa Park. The round-trip walk took me three hours, but the weather was warm and clear, like every other day in San Diego. The main attraction at the park is a series of buildings constructed for the 1915 Panama-California Exposition, a Worlds’ Fair celebrating the opening of the Panama Canal. The buildings are perfectly preserved and rest among lush greenery and fountains. The park is obviously popular with families.

San Diego is beautiful and the weather was consistently perfect. It’s also expensive. I was stunned at the number and population density of homeless people everywhere I walked. 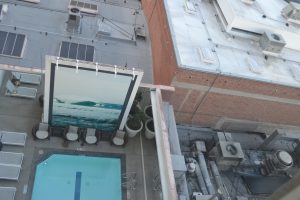 Between the time I planned and accepted my conference invitation, and the actual trip, the American political landscape changed drastically. Although I considered cancelling, ultimately, I decided to go. And I’m glad I went, but I may take such decisions a little more cautiously in future.