Humans represent a geological blink, yet in the last couple of centuries, we’ve stressed the planet by raping and pillaging that which geological time took millions of years to create. There seems a strange myopia in our notion of progress; we use growing amounts of energy from diminishing sources. Public discourse on pollution started when I was a child, and we discussed alternative energies in high school. Yet this awareness has led to little positive change in the ensuing decades. Sometimes it seems that human animals only progress when prodded by impending disaster.

And while some move slowly, others move with a sense of urgency, but time has a subjective fluidity about it. People with dementia embody subjective time more boldly than most of us, able to conflate days, and seasons, and decades into the same moment; the ultimate sense of flow, but not necessarily desirable. I prefer to get my flow from engaging with work, creative or otherwise. Amazed, as always, to discover that while I’ve been working, the sun has set, the cats want their dinner, and my body is begging for relief. My recent use of dollar-store kitchen timers is helping me break up the day, reminding me of the need for movement.

At some point, and probably for either religious or economic reasons, humans invented clocks, somewhat nullifying our sense of subjective time. Once beyond sundials and clepsydra, early clocks tended to be in church towers or central squares. Although declaring their mechanical sovereignty over each town, they were notoriously fickle. The San Giacomo di Rialto clock, installed in 1410, has never kept reliable time, but it has survived two fires. And of course, there was no consistency of time from town to town. Even if clocks challenged subjective time, each town still had its own temporal identity. But we’ve moved from clockwork clocks into the digital age. At what point will it no longer be viable to ask those being tested for dementia to draw a clock face? And really, who needs to keep time with digital accuracy on a daily basis? 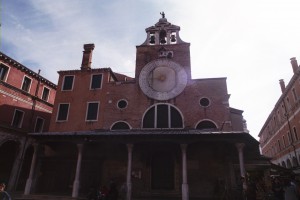 San Giacomo di Rialto, Venice. This clock has been dysfunctional since it was installed in 1410.

I’ve been increasingly intrigued by Steampunk (more on that in a future post). I devoured H.G. Wells’ novels when I was younger, so Steampunk gives me a pleasant sense of reacquainting with the familiar. One supposition is that, by marrying contemporary with Victorian technologies, Steampunk opens the question of whether we took a wrong turn during the industrial revolution. While that may be so, as we generally conceive of it, time only runs in one direction.

Author-physicist Alan Lightman presented a series of alternative conceptions of time in Einstein’s Dreams, and I’m sure there’s one episode in which time does run backward. Italo Calvino tackled notions of time and forms of consciousness in his Cosmicomics. Author-historian Caleb Carr projected ever-so-slightly forward to create the future history of Killing Time, in which events are almost recognizable. Some authors, John Keats for example, had very little time to make their mark, and yet they succeeded. The list of authors who’ve played with time goes on almost ad infinitum, especially once the science fiction wormhole is opened.

As I write the dissertation, I occasionally reflect on how different my PhD research would have been if I’d tackled it earlier in life, as I’d intended. Sometimes life corkscrews and plans are put on hold until the right time. I didn’t want to start the PhD with the threat of parental illness and death still hanging over me like a dark cloud. A downside to people having children later in life is that the kids may have to deal with life-changing adjustments and care giving before they have fully inhabited their own lives. Those earlier years were used in other ways, but I’m glad that I’ve circled back to complete this academic episode; I always knew I would. I do, however, have some hope that time expended caring for others’ lives gets tacked onto the end of my own life, although I doubt that time, or biology, work that way.

October—when the world goes to sleep. Halloween—when the veil between worlds is thinnest, when time momentarily evaporates. Dreamtime allows the dead to cross timelines for nocturnal visits. This month, I had a dream of my Dad and Moon, my first and blackest cat, the three of us climbing across rooftops. I try to find significance in such dreams, but they are only visits. The awareness of loss remains on waking, even if it was lifted for a brief time, even if I am grateful for the dreamed remembrance. As my mental state quickens with work on the dissertation, I am waking too early, in the full darkness of night. Although I am truly diurnal, I find myself embracing some odd sense of being a night creature, of being up and active when the world is in full dark and quiet. In the fall, I become aware of the shortness of days and the coldness of nights. Even as I continue working, I am slipping into hibernation.