When we travel, inevitably we bring our domestic notions of correctness with us. We all have our prejudices; whether we care to admit them or not is another question. My most profound moment of ethnocentrism occurred when I was standing naked in a B&B bathroom in rural England, trying to figure out how to coax hot water from yet still another unique shower system. I caught myself thinking, “Why can’t the Brits do this right? At home, or anywhere in North America, I can simply turn on a tap and, hey presto, hot water! What’s wrong with these people?” Most British bathrooms use on-demand hot water systems, which are considered a more frugal use of resources; however, no two systems operate quite the same way. And most British homes are not well enough heated to want to stand around naked figuring it out. The moment passed quickly, and I found myself smiling at its triviality.

When one travels, if one is open, one also sees and experiences things that are unfamiliar, but actually much more civilized than one is used to at home. The hotel signs in Bergen, for instance, were much more entertaining than those I’ve encountered anywhere else. 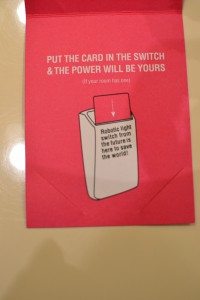 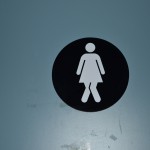 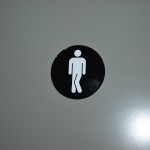 Similarly, many Bergen public washrooms signs exhibit a humour one does not usually associate with public washrooms. The Norwegian sense of humour is apparent in such gentle touches.

Traffic in Lisbon was truly scary. Both vehicles and pedestrians view traffic lights as vague suggestions for maintaining order. In the main tourist area, traffic lights were often out, and people unfamiliar with the city skittered across many lanes at speed, trying to avoid injury. Lisbon, however, also featured the most civilized public washroom I have ever encountered. Not only was it immaculately clean, but as well as the requisite toilet, it also featured a bidet. A bidet in a public washroom. 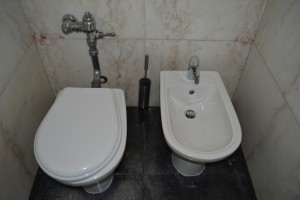 In other places, sanctioned attempts at formality may be tempered by members of the public. This is notable in graffiti, which I often photograph when travelling. One of the most striking examples I’ve seen was this bust in a Paris park which had been augmented, perhaps as a political statement. 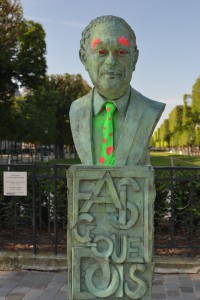 Venice is, without doubt, one of the loveliest cities I’ve travelled. A city with a rich pharmacological history, it still features many drugstores, both modern and vintage. In case you can’t find one open, 24-hour vending machines can fulfill your needs. These appear, inset into ancient walls, throughout the island. The contents include feminine hygiene products, but are generally heavy on condoms. 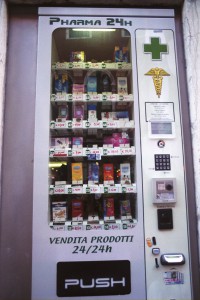