I left Toronto with a full yellow-orange moon rising on the horizon. Descending into London  at daybreak, I saw either a sun-dog or a moon-dog, but couldn’t tell which. Time travel, i.e., travel between time zones, creates that kind of confusion. The Thames wound into the distance of an intense peach skyline, as an armada of lights escaped Heathrow one after another. After a brief stopover at the airport, I was on to Lisbon.

My introduction to Lisbon was the man on the subway playing accordion with a Chihuahua perched on his shoulder, a little basket made of a pop bottle bottom and string dangling from the dog’s tiny mouth eager for donations. Lisbon is rich in history, but its present is pretty threadbare. 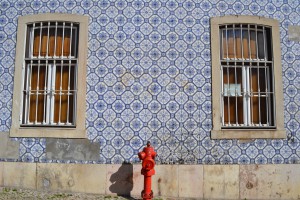 The conference papers were strong and in tune with my work, but sitting outside drinking Linden tea under a green canopy in the scent of White Jasmine and blinding sunshine (after the rough winter we’ve had), that was glorious! I stuck with the conference, but took advantage of Saturday afternoon-evening and Sunday to explore.

My hotel was near the conference site, outside the downtown core, on a street not shown on any map. Lisbon defies mapping, and even the locals seem confused by its layout. It’s a medieval city, and apart from the Baixa, a district that was razed and rebuilt, it has maintained its labyrinthine illogic of narrow laneways. Adding to this is its hilly terrain, and a tendency to build upwards rather than outwards. I like to explore on foot, but Lisbon is not optimal.

I set out in search of the Castelo de São Jorge, but never succeeded in entering its grounds. How can you lose a castle? Especially one that size, perched high on a rock, right downtown? You’d be amazed. I caught a few glimpses, but by the time I found the entrance, it was closed for the day. Undeterred, I continued my exploration. 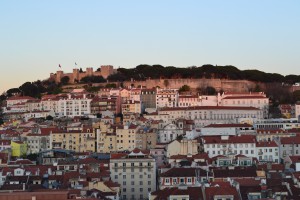 I found my way to the Tagus riverfront at the edge of the Alfama district, and then continued into the Baixa, the tourist quarter. Most cities keep their active seaports away from tourists, but not so in Lisbon; here, they overlap. In the Praça do Comércio, an enormous open square and former site of the royal palace, signs abound warning tourists to beware of pickpockets. In the square’s centre, a statue of King José I rides, and an enormous arcade and triumphal arch open into the city’s streets. This area, rebuilt in 1755 after the earthquake levelled much of the city, is on a grid pattern, making it much easier to navigate. 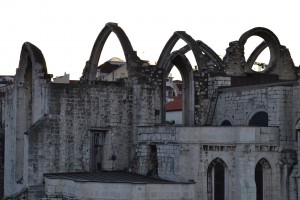 The Elevador de Santa Justa is located between the Baixa and Chiado districts. It was built by Raoul Mesnier du Ponsard, a student of Alexandre Gustave Eiffel, and opened in 1901. The elevator’s wood and brass interior speaks of its provenance. From the Elevador’s high viewing platform, I was finally able to see the castle; the Igreja do Carmo, a ruined church that reminds Lisbon of its tragic past; and much of Rossio and the Baxia. 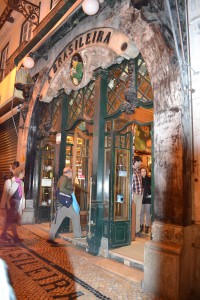 Continuing into the Chiado quarter, I ate a light supper at the Brasileira, an Art Deco café once favoured by artists and intellectuals. After the main course, I had my first pastéis, a small custard tart made with phyllo-like pastry, its top burnt like crème brûlée. It was good, but the one I had later in Belém was better. 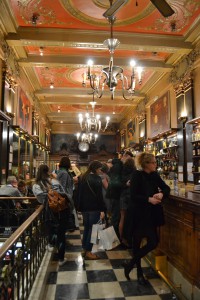 A life-sized bronze statue of Portuguese poet Fernando Pessoa sits at a table outside, still haunting the café where he once wrote while enjoying a smoke, bica (Portuguese coffee) and absinthe.

I took a cab back to the hotel—the best way to get around Lisbon. The cab’s radio played Canadian Bryan Adams’ “(Everything I Do) I Do It for You,“ making me feel like it is a very small world indeed.

Sunday marked my excursion to Sintra, a brief train ride beyond Lisbon. Similarly to Toronto, in Lisbon the subway doesn’t open until 9 a.m. on Sunday, but I was still able to catch the 9:40 train to Sintra. Lisbon sprawls, with miles and miles of apartment blocks in varying shades of white with varying shades of red tiled roofs, occasionally broken up by fields, cows, and quarries. There’s no sense of leaving the city and entering the countryside.

Once in Sintra, I had to choose which of the many castles to explore. I caught the bus up to the elaborate Palácio da Pena, its style and colours reminding me of Portmeirion, Wales. The site originated as a fifteenth-century monastery, then was rebuilt in the nineteenth century as a royal palace, and has been a museum since 1910. 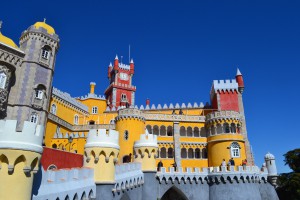 I revelled in the fantasy of the place, and spent a very long time wandering its many rooms. From the parapet, I could see the ramparts of the Castelo dos Mouros, the eighth-century Moorish Castle down the slope. On the descent back into Sintra, the bold chimneys of the Palácio Nacional de Sintra are hard to miss. On the train back to Lisbon, I kept catching glimpses of the Roman aqueduct spanning the landscape.

I ended the day with a tram ride out to Belém to watch the sunset behind the Torre. This is the site from which countless ships ventured during Portugal’s historic past. Exiting the tram, I saw what I thought was the royal palace, but turned out to be the extraordinary sixteenth-century Santa Maria de Belém, a monastery. Aiming towards the tower, I strode past the Centro Cultural de Belém, a recently constructed monumental box of a building. Nearby is the Monument to the Discoveries, an oversized statue built in 1960 depicting the lineage of Portuguese explorers. While not to my taste, it’s clear that much has been invested to attract cultural and tourist dollars to Belém.

I made it to the Torre de Belém at precisely sunset. Built just offshore in the Tagus River in the sixteenth century, the tower marked the starting point for numerous expeditions out from Portugal. Because of its maritime importance, the Tower was declared a UNESCO World Heritage Site in 1983. No one had mentioned the wide amphitheatre-like steps facing the Tower on shore. I watched the tide change like a symphony, the Tower itself beautiful in its wading stance, resting ankle deep like a moored chess piece.

I trudged back into central Belém and had an amazingly good veggie burger on a patio, while watching the line-up at the famous Pastéis de Belém slowly dwindle. I’d been keeping an eye on the mob since my arrival. About half an hour before closing, the line-up was finally manageable. I only waited a few minutes before being handed a Pastéis de Belém, larger, firmer, fresher and warmer than the one I’d had at the Brasileira. It was the right taste to take me back into Lisbon to pack for too-early a flight home the next morning.