We moved around a lot when I was a kid, and I turned eight when we were living in Rome, Italy. This spring I went back for the first time since then, and while some things are eternal, a lot has changed.

The day after I arrived, I took the metro out to EUR, Mussolini’s urban experiment, where we’d had an apartment. Looking for the street address, I was reminded of a Dr. Who episode in which Peter Capaldi says, “intuition is memory in reverse.” I found my way back to the building more by intuition, rather than memory. I never would have found it without the address.

Wandering the old neighbourhood, I think I found the coffee bar we used to go to on Saturday mornings, but the interior has been completely remodelled. There was no more gelato, so I settled for a cappuccino. I may also have found the newsstand where my Dad used to buy me Topolino (Mickey Mouse) comics, and I bought myself the latest issue.

I walked to Luneur Park, which I think is a rebranded version of the Luna Park I remember. It was much smaller, but some of the rides were updated versions of rides I remember. I tried to visit what was once my school, and what is now the Canadian Embassy. My pre-trip emails went unanswered, and even brandishing my Canadian passport, I was not admitted.

With the nostalgia cleared, and the conference ended, I did more touristy things. 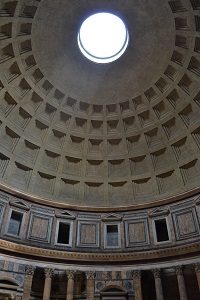 The Pantheon, a pagan building re-purposed by the Church

I approach Vatican City via the dominating fortress of Castel Sant’Angelo. Once I find my way into St. Peter’s Square, its size is daunting. Specifically, I want to see Michelangelo’s Sistine Chapel ceiling. The problem is that the Sistine Chapel is at the far end from the Vatican Museums entrance. Although I stop to investigate a few canvases and tapestries along the way, far too many people crowd the halls. It’s an hour-and-a-half forced march jostling along with an unforgiving crowd, sometimes pushing through doorway bottlenecks, in sweltering heat, with nowhere to rest and nothing to drink, to finally arrive at the Sistine Chapel. I can’t imagine trying to do it with small children or seniors.

The Sistine Chapel is smaller and the ceiling higher than I expect. It glows with the recent restoration. It is a truly spectacular and vibrant work.

There’s no seating in the Chapel, and the crowd mills about looking up. It’s virtually impossible to see any of the other masters’ works on the walls. Constant announcements, with increasing volume and frustration, urge tourists for silence. A burly guard watches the watchers, yelling “No photos” at the guilty parties. (Having survived the unpleasant experience of getting to this room, I sneak a picture, undetected. It is a subtle form of resistance against a heavily felt oppression.) Another announcement tells people to leave the Chapel so others can enter. There’s another struggle to leave, but then the crowd disperses and I can breathe easier again. I leave feeling sad for the artwork, and for this little Chapel. 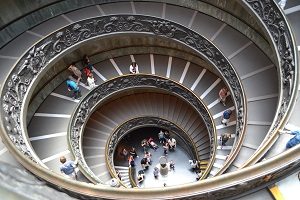 Even though the Colosseum is crowded, it doesn’t feel claustrophobic, maybe because it’s outside. The ruin is very different from the way I remember it when my school bus drove past it in the morning (the road has since been re-routed). Now, there are a lot more people, and very few cats (although I did see cats lounging in less touristy ruins).

One day, I walk from my hotel near the Spanish Steps to the Tiber, then along the shore to the Bocca de Verita (proud to say I still have all my fingers!), to the Baths of Caracalla. I am astounded by their scale, and the elegance and completeness of their many mosaics. I continue walking to the Piramide and the Non-Catholic Cemetery where Keats and Shelley and Shelley’s son William are buried. It’s a moving place, with verdant gardens, and many well-cared-for resident cats. I take the metro back and drink a full litre of water with dinner.

On my last full day, I do something I’ve wanted to do for a long time. I walk part of the via Appia, starting at the Aurelian Wall, and going as far as the Capo di Bove. I stop to explore the cool, dark subterranean Catacombs di San Callisto (nothing like I saw in Paris, as here, there are no bones!), as well as the massive Mausoleo di Cecilia Metella with its many statues and reliefs. The via Appia is nothing like I’ve imagined it. Because it’s a narrow road with high walls on either side and few sidewalks, it’s dangerous for walking. Cars take it at speed. If I were to walk the via Appia again, I’d start further out, where more monuments and ruins lie.

I saw various other buildings and fountains. After careful consideration, I threw three coins in the Trevi Fountain, before being shoved aside by another tourist. In Piazza Navona, I managed to avoid the most aggressive hawkers, but watched them fastening bracelets to strangers’ wrists, trying to engage them in conversation, and then demanding payment. I was relieved to find no crowds around the Triton Fountain, so I could truly enjoy the experience. I guess it hasn’t yet appeared in a movie and been quite so overpopularized. 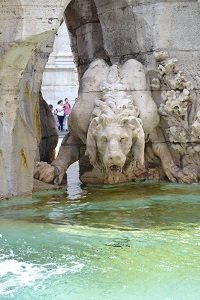 Even before peak season, Rome’s sites are flooded with too many tourists, often rude and pushy. Security, police and military units are on crowd control at all the popular sites too, and with so many tourists, they don’t feel the need to be pleasant. I was yelled at for walking the wrong way in St. Peter’s Square, for not moving along fast enough in various religious buildings, and at the Ara Pacis (Altar of Peace) for walking in without paying when it wasn’t apparent how or where I was supposed to pay.

Even in early June, temperatures were in the mid-to-high 30s; I can’t imagine it in August. I had gone for an international two-day Visual Culture Conference, but experienced so much more. Overall, it was a mixed trip with a few pleasant surprises, but more disappointments. 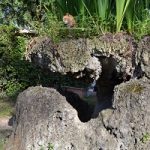 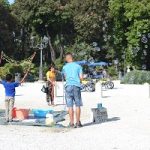 Bubbles for “Ferrari, Dentist and Socks” at Villa Borghese 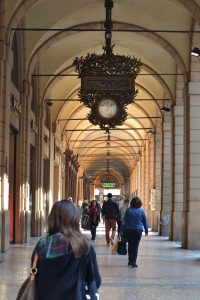 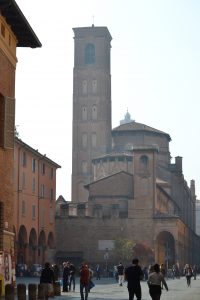 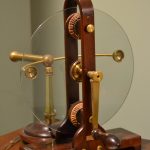 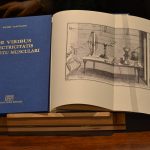 While there’s no doubt that Florence is a heavily touristed destination (Ciao. Selfie stick?), it’s still an exceptional city. I had my first taste last fall, and this is the first chance I’ve had to write about it. 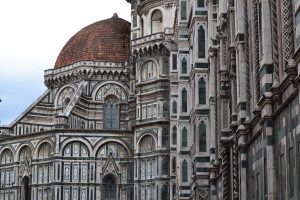 Although I’d seen dozens of photographs, I wasn’t prepared for the shear magnitude of this building, nor its architectural intricacy. It seems to have its own gravitational pull; no matter where you are or where you’re walking, somehow one always ends up on a path around this monumental structure.

I tend to do a lot of walking when I’m travelling, and so I tend to focus on architecture; however, on this trip I also spent time in galleries I’ve been wanting to see my whole life: the Uffizi and the Bargello. 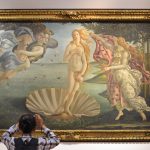 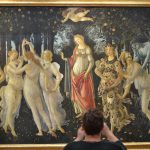 The Uffizi contains paintings that are familiar to most, even if one has never travelled to Florence; the Bargello contains statues I remember from my high school art history text. It’s a good idea to get tickets in advance, as these galleries attract crowds, especially during tourist season. 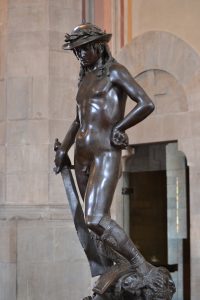 In the Piazza della Signoria, near the Uffizi entrance, is the Loggia della Signoria, containing numerous amazing statues. It’s best to go early to allow entrance into this free outdoor exhibit. This is also the square where Girolamo Savonarola held his bonfires of the vanities, burning books and other apparently sinful objects. It’s also where he himself was thoroughly executed in 1498.

Michelangelo’s David is synonymous with Florence. A copy of the original stands on top of the hill in the Piazzale Michelangelo, affording views of Florence from the less touristy side of the Arno. Another copy is situated outside the Palazzo Vecchio in the statue’s original position, near the Uffuzi. The original in the dell’Accademia is worth the effort to see (although beyond the Michelangelo gallery, I found little else of interest). The level of detail is exquisite and compelling. 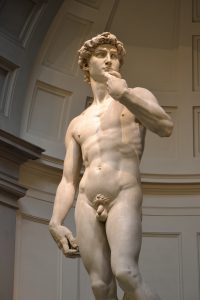 I loved Florence, in spite of the tourists. I went in the fall, off peak season, so I can’t imagine what it would be like in the summer.