December 22 at 2:40 a.m. my power went out due to the worst ice storm Southern Ontario has seen in years. Tree limbs that lacked resiliency snapped off under the weight of ice, taking power lines with them and landing on a few cars and roofs. Hydro’s initial estimate was that power would be restored within 72 hours. That’s a long time in a society so addicted to gadgets that require electricity to function, but it’s a really long time when temperatures are below freezing and when fridges are packed with perishable holiday fare. It’s a really long time for people trying to travel home for the holidays. Flights in and out of Pearson International are delayed or cancelled. 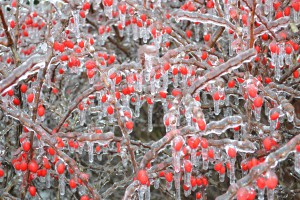 The ice storm was beautiful–but inconvenient.

This Christmas won’t be the Christmas a lot of people had planned. A lot of folks won’t be able to get home. Travel plans will be changed at the last minute. A lot of food will spoil or will have to be consumed before it spoils. Barbeques will be fired up out of season. A winter’s worth of wood will be burned in a few days trying to keep pipes from freezing. Kids will spend the holidays camped out on living room floors in sleeping bags trying to stay warm. Strangers will share feasts of homemade cookies in airport lounges. Some will be disappointed. Some will think it’s the worst Christmas ever. Others will be creative and resilient and find ways to improvise. Arriving safely for Christmas is more important than arriving on time for Christmas. Even without power, tomorrow will come. 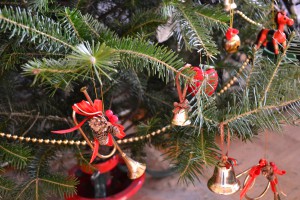 I’m lucky that my building has a back-up generator, so there is some heat, running water, and enough power for lights in the common areas and to run the elevators. This is a long way from a UN refugee camp, with multi-generational families crammed into unheated tents without adequate food or water. We are so spoiled to have been born into such privilege that we feel entitled to get angry when we don’t have everything we think we need. Yes, there will be hardships, but even if it takes a full week to get everyone’s electricity restored, we will recover very quickly.

I’m enjoying a warm cup of tea made from water heated on my fondue set. The building seems quiet without the hum of industrial systems and almost no traffic outside. It’s a little like being in the university library after exams, after the students have left, on the last day before campus closes for the two-week winter break. An eerie silence. A bit post-apocalyptic.

Monday morning 8:45 a.m. the power is still out. I’ve moved everything from the fridge into a cooler on the balcony. The building across the street from me, and everything southward, has electricity. I wonder if this is a little of what it feels like to live in places that don’t have our advantages, to look across borders and see the wasted resources. Makes me think even more about what we have and how we use it.

I’m enjoying the adventure of using my fondue set for cooking. I was getting tired of cold food, so managed to cook some noodles, as well as a cup of tea. Tried knitting by candle light this evening; it’s difficult to tell the knits from the purls. I rigged up a four-candle powered heater I saw online a couple of weeks ago (I am the child of an engineer; how could I not give it a go?). The air from the chimney was about 34°C / 94°F but I would need several to heat a space this size. The temperature in the apartment had dropped to about 17°C / 64°F and the outside temperature is going down to -10°C. I hauled out extra blankets and one of the cats cuddled up with me. Without the interference of artificial light, my diurnal clock is even louder; by about 4 p.m. it feels like bedtime and I have to struggle to stay awake until 8. It’s cold and bed is the warmest place to be. I settle in for a long night. 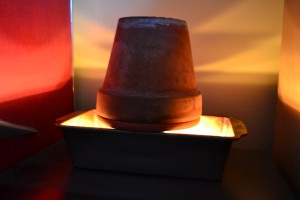 I’m the child of an engineer. How could I not try this out?

By Tuesday, Christmas Eve, 6:17 p.m. word is that power may not be restored until the weekend, a full week after the outage. I confess to finding a certain pleasure in the absence of the demands of electronic devices. I was seriously considering giving up my land line, but I’m glad I haven’t; it’s the only way I can contact the outside world. And I broke into the Harvey’s Bristol Cream Sherry. The cause for celebration? We were informed that we could access more heat! It’s been about 15°C / 60°F all day. That doesn’t sound so bad, but when you’re sitting in it, you start to feel it. With another cold night ahead, someone from the building came in and diddled with the radiator override, so now heat is pouring forth! Much relieved and so is my cat. Water and heat—the only convenience missing is electricity for lights and cooking.

Fortunately, a friend invited me to his place for Christmas Day, where I had good company, a hot meal, and was able to cook some perishable food before it spoiled. When I got home later on Christmas Day, the power had been restored, thanks to the efforts of numerous local and visiting Hydro crews. It was out for a couple more hours on the 27th, but generally things seem to be returning to normal.

I hope that this holiday, without reliable power or transportation, causes people to reflect on their good fortune, testing their resiliency in the face of unpredictability, finding faith in themselves and humanity, to make the holidays bright and moving, even if they are not quite as planned. 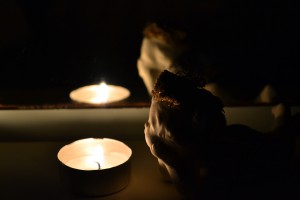 A good time for quiet reflection.