“We’re getting the band back together. Really.” That was the message I got from Ian in April. (Where would we be without The Blues Brothers and Face Book?) One Mind hadn’t played together in (gulp) 28 years! A gig was booked at the Hunter Street Caribbean Festival, a Jamaica Self-Help fundraiser in Peterborough, and most of the other band members had already been tracked down; some of the guys were travelling from Bermuda and Calgary, as well as Peterborough and Toronto. In spite of a certain trepidation (When was the last time I played on stage? When was the last time I even played?) I jumped at the chance. The idea was to keep it simple, make it fun. Dub-reggae with two basses was definitely going to be fun! 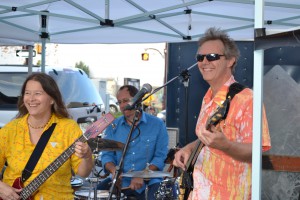 Ian and me together gives a whole new meaning to double bass. Rob on the kit in the background. Special thank to Loren for most of these photos!

I’ve been a closeted musician for years now, essentially since I left Peterborough. With the impending gig, I pulled out my bass and my flute, and started trying to sing again. I discovered that I’d forgotten how to tune a guitar. My fingers were stiff and clumsy, with nothing of the speed I remembered having. To my surprise, I got sound out of my flute on the first try! I practiced a little each day and everything started to come back, kind of like opening the lid on a past life.

With eight of us scattered across Canada and beyond, the reunion proved to be a positive test of technology. Ian posted a bunch of old songs online, and after I figured out how to digitize my wonky old cassette tapes, I posted a few more. We’d never written anything down; it was all done by ear, so having and sharing the recordings was essential. We voted on our favourites and came up with a set list. Old-school reggae never gets old and Chet’s poetry is still surprisingly relevant. While it’s good that the words aren’t particularly dated, it shows how few social injustices and inequalities have been addressed in all this time. 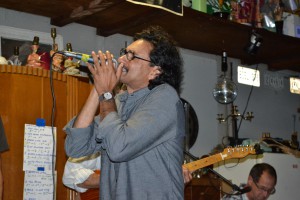 Chet on lead vocals at the Toronto gig. Parts of John and Rob in the background.

The week before the gig, those of us in Toronto got together for a half-band practice. Ian and I doubled up on bass, with me also doing a bit of flute and vocals, and Ian sometimes playing with percussion toys. Rico pulled out his percussion instruments, and John, who’d just flown in from Bermuda with some rum, supplied guitar chops. And yeah, we did practice, but some of us hadn’t seen each other in decades, so it was also a chance to catch up on life. Then we trekked up to Peterborough to join the rest of the band for two more rehearsals. Rob, the only one of us still gigging regularly, has been playing guitar with Dub Trinity, a fabulous Peterborough-based ska band. Chet, our intrepid lead vocalist, has recorded four CDs in the last few years, continuing to write politically charged lyrics addressing existing and new political situations. Tim, joining Rico on percussion, flew in from Calgary, and so did David, complete with his keyboard in a substantial travel case. (There was some conjecture that perhaps some of the smaller band members, i.e., me, might be transported safely to out-of-country gigs in a such a travel case.) Rob negotiated rehearsal space for us at Artspace and the set came together surprisingly smoothly.

August 1, I came in from the cottage early to check out my old stomping ground of Peterborough. They’d closed the street between George and Water for the Festival, making way for vendor and food tents, as well as the stage, and people were beginning to drift in. The guys started to arrive, several with partners and kids. There was entertainment throughout the late afternoon and evening, with One Mind taking the stage at 7:45. 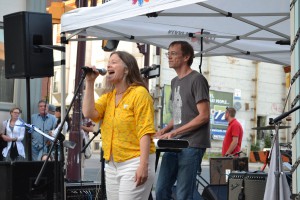 Me belting out lead vocals on one number. David on keys.

Was it perfect? Well, no. Was it fun? Hell yeah!! We had a great time and had overwhelmingly positive feedback. We saw people we hadn’t seen in decades. Part of the magic of reggae is that even when the message is critical, the music makes you move. A cluster of little kids danced in front of the stage and Ian’s Mum, in her 80s, was there, dancing and smoking in front of her chair, a little smile on her face. When I tried to introduce myself to her later, she said, “I know exactly who you are!” She actually remembered me, which was a surprise. Dub Trinity came on right after us, so Rob immediately switched from the drum kit to his guitar, something he said was a bit of a relief. We get used to doing what we’re doing now and it’s challenging to try something one hasn’t done in a long time. Eventually, we all ended up at Rob and Sarah’s seated around the table in their backyard, talking well into the night.

The next day, we all made our way to Toronto, for the second, more intimate gig, in Patti’s garage. Rico and his partner William hosted another barbeque (the first was at Rob and Sarah’s on one of the rehearsal nights) and so, yeah, we were definitely running on Caribbean time for set up! It was a smaller audience, again with some family, some folks who drove down from Peterborough and some Toronto friends. 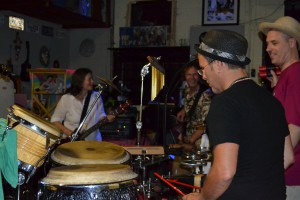 From left to right, me, Ian, Rico and Tim at the Toronto gig.

Rico’s Mum commented afterwards: “What a wonderful group of people you all are and you all looked happy playing music. You are all good people and good friends.” No one wanted it to end, the goodbyes hanging on. People said their goodnights, but only made it as far as the walkway. I kept thinking of the little character at the end of Just for Laughs who cries, “Mommy, it’s over!”

I woke up at five the next morning, around the time a couple of the guys would’ve been leaving for the airport to head to their respective homes. One Mind indeed. And now I’ve had a couple weeks to reflect on something so special that it’s difficult to articulate. As Rob noted, there wasn’t any of the “back in the good old days” which sometimes pervades reunions; maybe because we’re all feeling pretty happy in our lives, “these are the good old days” (to quote Carly Simon). When Tim told me “You look exactly the same!” I said thanks, then suggested that he’d better not look too closely, but essentially, we do all look pretty much the same—except for Rico, who looks even better! David noted that none of us have gained weight; in fact, in spite of a few accidents, a couple considerably more catastrophic than mine last fall, we’re all in pretty good shape. 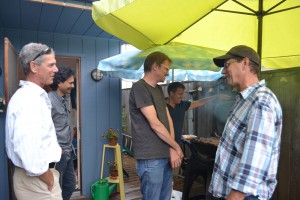 From left to right, John, Chet, David, Rico and Rob enjoying the barbeque before the Toronto gig.

I love these guys. I feel really fortunate to have been part of this band, then and now. This feels like a reconnection, a lost link regained. Amazing how quickly the connections come back together, how fast we were back in synch; only a couple of full band rehearsals and we were reading each other like old paperbacks. This is the way people play together, through the transmission of body cues, even if most of us haven’t played with anyone in years. And getting back together again supercharged a creative energy in me that had been running kind of low. After trying for several years, I’m finally back into the music. It revealed some things to me about my youth, about how, in spite of some external criticisms, I was on a positive path. We’ve all made it to middle age with most of our youthful ideals, ethics and humour intact. I mean sure, we’ve grown up, most are happily partnered, some with kids, most have bought houses and cars, and some have lost parents, but all of us seem to have settled into lives we enjoy, doing things we value and feel positively about. There’s no sense of resignation common to middle age, no jaded cynicism. And when we play, it’s like we’re twenty-something again, with that same spirit and energy. If we’ve made it through to the middle years with our youthful hearts intact, I think we’ve got a good shot at making it into old age the same way; I think we’ll help keep each other young in all the right ways.

It was fun before, but it feels like so much more fun now. A reunion of something so positive and affirming, that no one wanted it to end. And it won’t. We’ve been sharing photos, videos and sound recordings of the gigs online (links coming!). There’s already talk about another reunion again soon, maybe in Calgary or Bermuda, where some of the other band members live. There’s talk of not waiting another 30 years until next time, or there won’t be room onstage for all eight of us with our walkers.

Thank you all. Blessed be. Safe journeys (“life is a journey”). One Love. 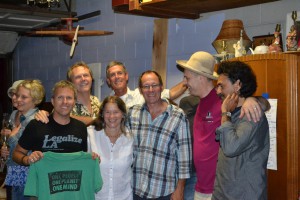 Me and the boys after the Toronto gig.

1 thought on “One Mind Band Reunion!”