May was a month of travel as the Swimming in the Ocean tour began. My first reading from the new book was in Peterborough (my old hometown), then I read in Ottawa (where I lived for a couple of years), Montréal and Kingston. Travel tends to adjust my perspective in a unique way. New environments enable me to see things I wouldn’t notice otherwise.

Peterborough is a pleasant enough place, but it was frustrating to spend my youth there, especially because I’d already travelled in Europe and knew there was a lot more arts and culture in the world than Peterborough could offer. Nevertheless, it was fun to get my picture in the paper because of the new book and to have an enthusiastic hometown crowd at the reading.

Ottawa and Montréal kind of run together in my head as I was back and forth between them for a week. (Note to self: Don’t ever again agree to readings which entail this kind of travel!) I stayed for the week at my friend Péter’s house in Hull where we ate good food and I raided his rhubarb patch. I spent a whole day wandering around Ottawa, up and down Bank Street, the Sparks Street Mall and the Market. I love the smell of the Ottawa market. The outside stalls only have fresh flowers, fruits, vegetables and maple syrup (for half the price it is in Toronto). You can buy fish and meat and cheese, but you have to enter a store to do so. So as you walk through the outside stalls, you’re never overcome by the smell of protein.

I’m not as familiar with Montréal, having never lived there. I’ve explored the old city on previous trips but this time, because my time was limited, I stuck pretty much to the area close to the McGill campus. I was disappointed that avenue des Pins had no pines or trees of any sort and pleased that I could understand as much French as I did (although I’m a long way from considering myself bilingual). On the second trip, Péter and I drove in his car so we went to Fairmount Bagel and bought a couple dozen each. They really are the best bagels I’ve ever had; they’re not tough the way most bought bagels are.

So I came back from the Ottawa-Montréal leg of the tour with rhubarb (which I stewed and preserved), bagels (some of which I froze) and 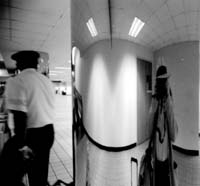 maple syrup (which is sealed until the next time I make waffles). I think the store of comfort food has helped make up for the mild exhaustion.

As with Peterborough, the moment I got off the train in Kingston, I found the air easier to breathe than the air in Toronto. I’d never had much of an opportunity to explore Kingston, but I had a sense of comfort, of familiarity once I started walking around downtown. Sometimes I can’t picture a place in my head, but once my feet are on the ground, the familiarity of it is somehow evoked. This trip I had more time to wander and found some interesting juxtapositions that revealed a lot about the town and its history.

As I walked up Princess Street, I found its intersection with Clergy Street dominated by St. Andrews Presbyterian Church. On the side lawn rested a cannon, one that anyone entering the church’s side door would have to pass in front of. The plaque revealed that this was Shannon’s Cannon which was used in Londonderry, Ireland to defend the (Protestant) faith between 1649 and 1688, was presented to one William Shannon of Kingston in 1865, was subsequently presented to St. Andrews Church in 1909 and then restored in 1990.

Continuing the walk along Clergy Street, I found it intersected with Ordnance Street and when I entered McBurney (locally known as “Skeleton”) Park, I was confronted by a cement-mouthed cannon with the word “Peace” graffitied to its side. To my right stood an ornate stone Celtic Cross placed in memory of the estimated 10,000 Scottish and Irish immigrants who were buried in this park between 1813 and 1865. To my left was a kiddie’s wading pool and extensive playground equipment. Kingston is a complicated little town.I’ve lived in Toronto for over five years and I’m still getting usedto it. One has to park one’s body somewhere and nowhere is ever perfect; every place has its pros and cons so there doesn’t seem much point in complaining too loudly. I’m looking forward to exploring the polar opposites of Picton and New York City next month.